Hosting your code in AWS CodeCommit has several advantages, the main one being seamless integration with AWS CodeDeploy and AWS CodePipeline.

I use SourceTree as my repo tool of choice, with Git/Bitbucket as the back end.

If you have a team of many developers and want to slowly migrate your code to AWS CodeCommit Git repo, you can setup your SourceTree config to push to both repo’s.

1. You will need a SSH-2-RSA 2048 Public/Private keys, this is what AWS supports. So once you have generated/imported the keys to AWS, you can then import the same key to your gihub or bitbucket account. Then just add them to your pageant. Read Setting Up AWS CodeCommit

2. In AWS, when you import your SSH keys for a IAM User, it will give you a SSH Key ID. Write down this SSH Key ID and the password for it will be the private key password you generated with PuttyGen. Always use a password for your private key file.

3. In SourceTree, go to Tools/Options and set the private key to your AWS SSH Key. Remember we added this to Bitbucket and Git, so we can now use the AWS SSH Key/Pairs for both repositories.

The last part, is to configure your local repo to post to both repositories, until you happy with the migration.

4. In SourceTree, select your repository, and go to Repository/Repository Settings. Then add a new origin. It will be in this format: ssh://git-codecommit.us-east-1.amazonaws.com/v1/repos/MyCoolApp

5. When it prompts for a username and password, enter your SSH Key ID and SSH private key password 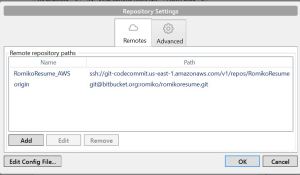 My only gripe with CodeCommit is no built in hooks to deploy directly to S3.  This would be great for static assets.

4 thoughts on “Migrating to AWS CodeCommit”